This article was published in Irish Examiner by Peter Gallagher on June 5th, 2018
On June 5, 2018 we completed the refurbishment of our new I-LOFAR Education Centre & Control Room at the Rosse Observatory, Birr Castle, Co. Offaly. 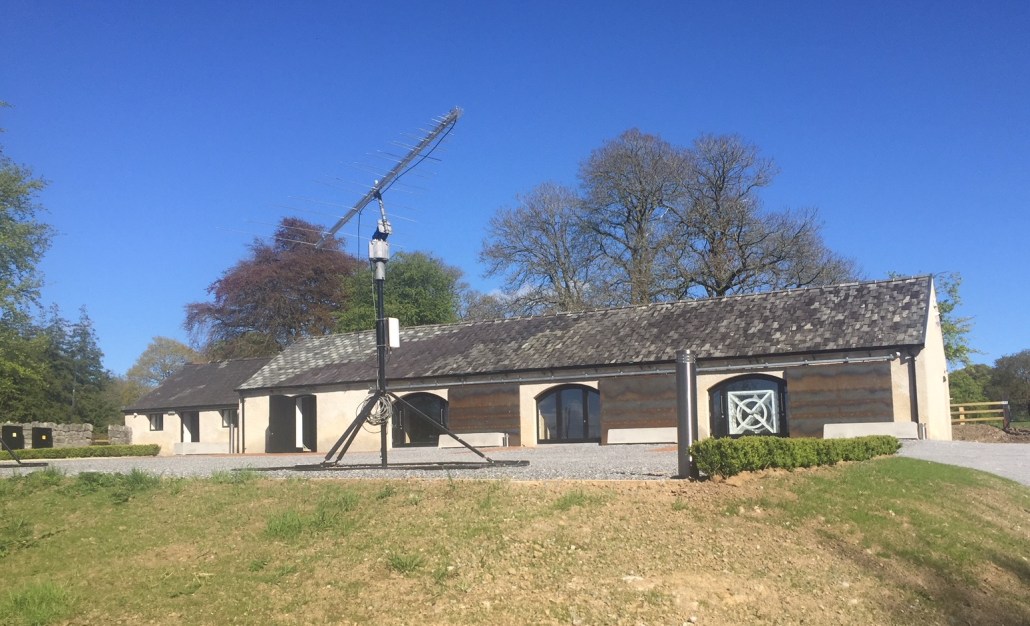 The Education Centre will be used to host groups of school children, university students, researchers, and tour groups interested in learning about the fascinating science and engineering of I-LOFAR. The Control Room contains computers to control I-LOFAR remotely and to processes the huge volumes of data that the array generates.
We’ve come a long way from the “Sheep Shed Control Room”!

We’re on the road to LOFAR … come on inside.

Groups or schools wishing to visit I-LOFAR can contact the reception at Birr Castle Gardens & Science Centre.
The refurbishment was carried out by building contracts Bracken & Sons (Offaly), Cooney Architects, consultant engineers Fitzsimhttps://i1.wp.com/lofar.ie/wp-content/uploads/2018/05/Education-Centre-Final.jpeg?fit=1030%2C626ons, Doyle & Associates, and project managed by Trinity College Dublin Estates & Facilities.
Funding for the project has been provided by the Rural Economic Development Zone (REDZ), Department of Culture, Heritage and the Gaeltacht, supported by Offaly County Council and the Offaly Local Enterprise Office.

This article was published in Irish Examiner by Paul Keane on Wednesday, February 14, 2018
Meath footballer Cillian O’Sullivan has welcomed the green light to redevelop their Páirc Tailteann GAA base, describing it as “long overdue”.

This article was published in Architects’ Journal  BY ELLA JESSEL in  APRIL 5th, 2018.

The globe-shaped structure will be a 18,000-capacity music and entertainment venue for MSG Ventures, the firm behind New York’s Madison Square Garden arena.

MSG has already purchased a 2ha site in Stratford near the Olympic Park for its London Sphere, its first international venue, and a sister arena in Las Vegas is also in the pipeline.

The visualisations reveal that the venue’s exterior will be covered with programmable digital screens to showcase artistes and brands.

MSG said its interior will boast the ‘largest and highest-resolution media display on Earth’ as well ‘crystal-clear acoustics’.

In a press statement the company said: ’Through the most advanced cutting-edge technologies, MSG will create powerful, immersive, multi-sensory environments that will transport audiences and change the nature of live events.’

Further details of the design are to be announced in the coming months and the company hopes to submit a planning application by the end of 2018.

The visualisations were unveiled at an event at the Copper Box Arena in Stratford’s Queen Elizabeth Olympic Park.

MSG’s executive chairman and CEO James L Dolan said: ‘London is one of the world’s greatest cities and we are delighted to be taking this first step towards making it the location for MSG’s first international venue.’

What makes PNC Park so good?

This article was published in pirates 2016  By ELIZABETH BLOOM

PNC Park debuted 15 years ago this spring, and while that may not seem like a major-league accomplishment, consider this: When Three Rivers Stadium turned 15, it was halfway to being imploded.

The Pirates’ current home couldn’t seem further from such a dusty fate. PNC Park still is thought to be one of the best ballparks in America, even though nine stadiums have opened since the North Shore park’s first regular season game April 9, 2001.

While all three of Pittsburgh’s professional stadiums opened within a decade, PNC Park seems to soar above the rest, a symbol of the city’s rise and a source of pride for its baseball fans.

Architecture firm HOK (now called Populous), which designed PNC Park, drew upon Pittsburgh’s natural resources and manmade features, particularly in orienting the ballpark toward its signature view of the city’s skyline and bridges.

The skeleton of PNC Park rises against the Pittsburgh skyline, Feb. 15, 2000. A sign on General Robinson Street notes there are 421 days until the new ballpark opens. (John Beale/Pittsburgh Post-Gazette)

“We learned to live in the city and understand the market,” said Earl Santee, the project’s lead architect for the Kansas City, Mo.-based firm. “We went to Primanti Bros., we went to the North Shore, we went everywhere, and we just lived that life.”

The designers also took hints from the city, particularly beloved Forbes Field, the predecessor to Three Rivers Stadium. They also envisioned the North Shore and the classic ballpark as lively extensions of Downtown via the Roberto Clemente Bridge, a fate that has borne out.

The design team’s focus on gathering spaces in and around the stadium has transformed the park and its surrounding streets into an anchor of activity on the North Shore. With two decks rather than three, PNC Park was able to maintain a feeling of intimacy, even though it is larger, in terms of square footage, than Three Rivers Stadium. Clad in cream-colored limestone and blue steel, it was the first double-decker ballpark built since 1953.

“It doesn’t overwhelm you in a way a lot of buildings can,” Santee said. “It feels familiar, but I really think it feels like Pittsburgh, 100 percent Pittsburgh.”

“When we envisioned the stadium, we also thought it should be smaller,” said Bill Newlin, chairman of Newlin Investment Co., one of the key planners for the project. “That gave the fans, particularly a baseball fan, the opportunity to get meshed with the actual field experience.”

In 2003, ESPN.com ranked PNC Park as the best stadium in Major League Baseball.

“When building a stadium, most teams just look at the most recent new one and say that they want one just like it, only bigger and more expensive,” ESPN’s Jim Caple wrote of the surprise winner. “Not Pittsburgh. The Pirates and the public built a stadium that is not only located in Pittsburgh but one that is part of Pittsburgh.

“Ray Kinsella was wrong. Baseball heaven isn’t in Iowa. It’s in Pittsburgh, along the banks of the Allegheny River.”

But as the North Shore ballpark celebrates its quinceañera, it is worth remembering how improbable the project seemed.

“It’s like any deal that, by hindsight, seems successful and exciting. You forget the number of times the deal almost failed to get done,” Newlin said.

In 1993, the owners of the Pirates told newly elected Mayor Tom Murphy of their intent to sell the team. A clause in the contract allowed the city, which feared the team would end up elsewhere, to try to secure new, local ownership.

But MLB would not permit the sale to a group led by Kevin McClatchy unless the Pirates had a new stadium — one that would not be shared with another sport, as had been true of the football-baseball mashup at Three Rivers Stadium.

The Steelers and the hotel industry argued that they, too, needed a new football stadium and convention center. So what started as an effort to keep the Pirates in Pittsburgh turned into a major redevelopment project for the region.

Fresh in Pittsburghers’ memory was the downward economic spiral of the 1970s and 1980s, when Western Pennsylvania was losing residents by the tens of thousands, businesses were getting out as fast as they could and Pittsburgh had dived face-first into double-digit unemployment.

And now, this new mayor was trying to build a new ballpark in a broke city that couldn’t pave the roads?

“To say the least, it was not popular at the time,” Murphy said.

The leaders, however, saw the ballpark as a way to turn around Pittsburgh’s fortunes, and worried about the symbolic and economic impact of the Pirates’ potential departure.

“It was a fundamental decision about whether Pittsburgh was going to continue to decline or we are going to reach forward as a city,” Murphy said.

After two years of construction and a $262 million pricetag, PNC Park staged its first regular season game in April 2001.

Fifteen years after Murphy, Newlin and others fulfilled their promise, few Pittsburghers would argue that PNC Park wasn’t worth the effort.

“It wasn’t just about sport,” said Santee, the architect. “It was about what the city of Pittsburgh wanted to become, and it became that.”

Bailieborough Abú!
Leanne Kiernan, Irish  international soccer player( who is from Bailieborough) with the Cooney Architects designed Campus Conference Centre at Abbotstown in the background.

Kilmainham office is our most recently completed project

Brook House, Thomastown, Co. Kilkenny, a new community of 5 homes, carved into a steeply sloping medieval street. Once home to the towns tannery master, has been transformed into a new community. The historic house has been carefully conserved and restored. The addition of a modern 21st century layer has been folded into its complex urban fabric, which reveals itself as you pass under the historic medieval archway. A new textured concrete canopy protects and echoes to the beat of its historic waterway. The central courtyard, the heart of this community, provides a space for its residents to flourish.